Just a quick catch up with some instagrams from my week. I wish I had more to write about! We are in the middle of the run for Madeline and the morning wake ups are a little tough but for a 2 hour workday I can suffer through it.

Life is not a struggle. It's a wiggle.

Today we opened Madeline and The Gypsies. After a mad dash to the finish line it feels like we finally had a show. I didn't mind the early call time. I enjoyed my coffee and walked to work. I hit a little bit of traffic on my way:


There was really great energy backstage -- some of the child actors had never been in a play before. It sent me back to my childhood performing at my local theater-- the nervousness and excitement and adrenaline that comes with doing a show. Admittedly I have grown a bit disillusioned and don't always get that feeling. I'm a bit jealous of them and it got me to thinking about a lot of things. This is actually the first fully staged musical I have performed on stage in about two years. That seems like a crazy amount of time and I think I forgot just how much I missed it. I think I almost resigned myself to not being cast in musicals again after college. What a Debbie Downer, right? Today I was reminded that even a children's show with a bad book can still be something worthwhile, and not to take for granted any amount of time being able to perform. It goes by so quickly.

This may not be the perfect show, the perfect cast or the perfect anything. But I am ultimately proud of what I have been able to bring to the table and what I have gotten to witness with some of my fellow company members. The jobs where you are playing the perfect part with the perfect cast and production team and everyone gets along great and is on the same wavelength is an extremely rare and beautiful thing. But that doesn't mean something of value can't be gleaned from any and every theatrical experience. If you're not playing your ideal part, explore every ounce of that character. You might surprise yourself once you get out of your own way. If others around you aren't being professional, don't let them drag you down to their level and don't let their unprofessional ways get you stressed out and flustered. You are in control of what you produce onstage and that's all you can attempt to control. Worrying about it or being lazy just because other people are is just going to hurt you. If no one is helping you, figure it out yourself. Keep pushing yourself to do great work. I truly believe that in any situation where I get to be in a show I am going to learn something from it. It might be something small, or it might change my entire life. But it is always worth it and I know I am blessed to be a part of this company here and now. Life is not a struggle. It's a wiggle. And I'm wigglin, baby!

A tiny glimpse of costumes and nonsense backstage of Madeline: 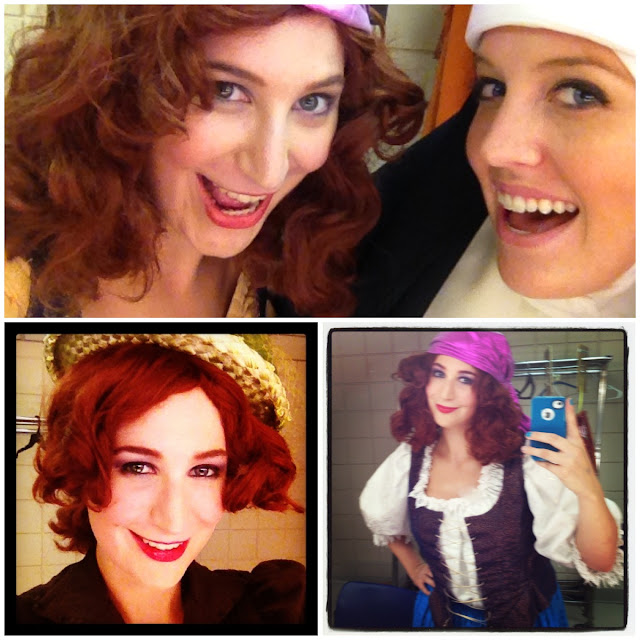 Oh and bt-dubs if I was ever afraid to call myself this before, (which is stupid, I have a freakin college degree...geez Sandi) now it's official because someone else put it in print. I'm a Professional Actor, Y'all! I saw it after the show in the program and I was one happy, sweaty, pincurly-headed girl. 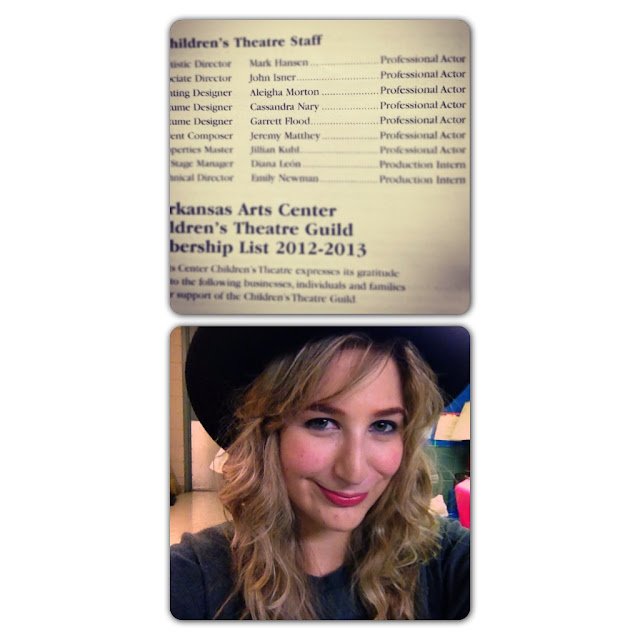 After the show I had some victory sushi with our awesome SM Sinovia. This was my fortune:

Everything Will Be Alright

So I haven't written a full post in a while, mostly because I've been kinda down on myself. We have a lot of down time right now and I've spent a lot of it recovering from hangovers, watching Parks and Rec from episode 1 season 1, and making friendship bracelets. Rehearsals have slowly become more fun and I feel like I'm actually doing something, but lately we've had shortened rehearsals and cancelled rehearsals so I've had no idea what to do with myself. It didn't help that I was absolutely broke. Now that I have one paycheck under my belt, I am trying to figure out how to budget my life and pay my bills and still live. This is a skill I have avoided acquiring up until now  and I admit I've been pretty ignorant of what things cost. I was living at home all of last year so I didn't have to worry about rent, which was helpful. Having an extra 600 dollars taken out of your income really puts things in perspective. And I am trying to be thrifty and responsible. But sometimes Sushi seems like a necessary expense...right? (See, I am terrible at being poor.) Jillian has helped me outline a rough budget so once I see how I really live maybe I can tweak it to be more realistic to my lifestyle while still managing to save some mulah. It's not going to be an easy learning process but I will get there.

So here's a recap of where I am mentally right now:

Things to look forward to:

P.S. Here Are some instagram shots of our time at Diamond Bear Brewery! 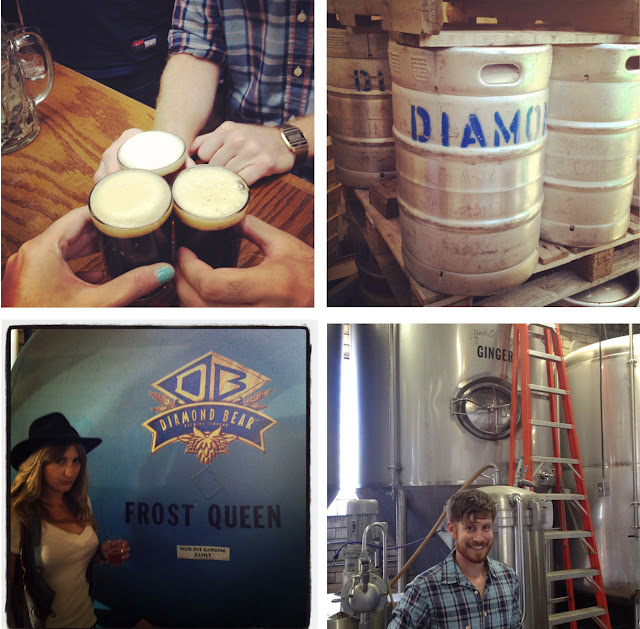 I hope everyone enjoyed Labor Day Weekend! I spent a whole lot of time doing a whole lot of nothing. But I wanted to show you a few instagrams from my life this past week.

Once You Climb Up A Mountain...

So my second week in Little Rock has been pretty...er..."rocky" to say the least. Sunday was our first annual 'Equity drinking night' where we gathered together to celebrate our first week and have good drinks and good company. I made some chicken fingers that turned out yummy, Aleigha made some awesome cheese spread and Jillian made some thoroughly delicious cinnamon bun cupcakes.

Monday was spent thrifting around Little Rock with Aleigha. I ended up finding this painting by William Holbrook Beard called "The Bear Dance" 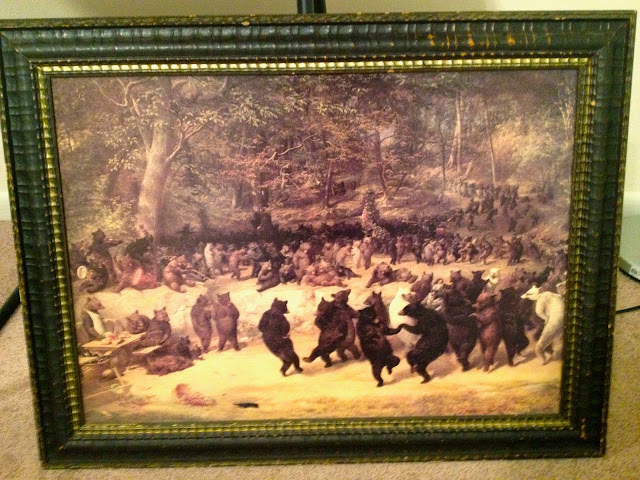 I spent $8 for a framed canvas reproduction that goes for around $200 online. Ba-zinga!

Thrifting is fun for me because I enjoy hunting through garbage in the hopes that maybe you will find one object, be it a sweater, a dress, a teacup or a piece of art that makes your heart lurch out of your chest. This painting reminds me of a friend from home, so it is worth the $8 to look at it every day and think of him.

Those of you who know me know a few things about me. 1. I am an actress. 2. I am sometimes (a little) dramatic. and 3. I am a crazy dog lady. These are my babies whom I miss very dearly. 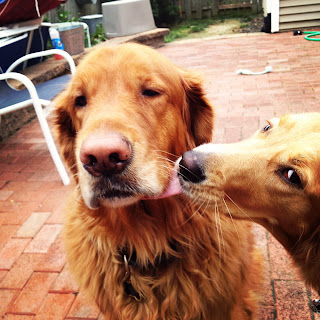 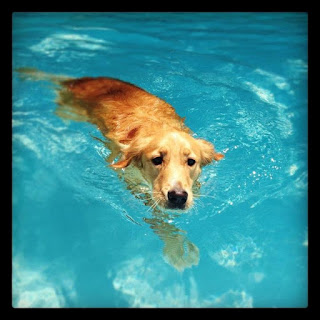 Aren't they the most precious beings alive? Well, I have always gotten along really well with dogs (even mean ones) so I very ignorantly tried to make friends with this little guy who lives upstairs: 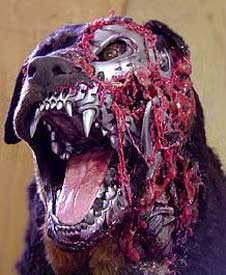 After his owner assured me he wouldn't hurt me and told me to stick out the back of my hand towards him "Bullet" jumped up and took me completely by surprise by biting me on my hand. I was so stunned for the rest of the day. How can a dog not like me? I firmly believe that there are no such things as bad dogs, just bad owners, but man meeting Bullet gave me kind of a crisis of faith. What kind of world do I live in if dogs aren't all nice?? Bullet may not have broken my skin, but he sure did break my heart. :_(


On a very different note I have been cooking more than I ever have in my life! I am pretty proud of myself, seeing as I have very little domestic talent. So far I have made:

It seems small now that I've listed it but honestly I rarely cooked at home. I made due with peanut butter sandwiches, cereal, and take out. Now that I'm financially responsible for my food I really can't afford, both fiscally and healthily(?) to eat out so much. Hoping to do this more in the future.

On Tuesday I went for a bike ride to the farmers market not too far from my apartment. I lost control of the bike and fell off of it, landing pretty hard on my legs/knee. So in less than 24 hours I had managed to be bit by a dog and eat pavement pretty hard. Awesome! Welcome to Little Rock!! 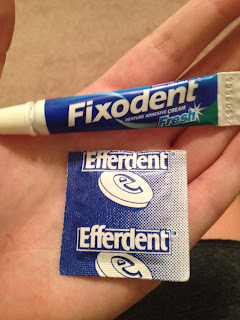 Wednesday the other company actors and I ventured off to climb one of the only mountains in central Arkansas, Pinnacle Mountain. I was told that this was a small mountain, more of a "hill", so I wasn't too worried about the climb being too physically taxing. I WAS VERY WRONG. This absolutely was a fricken mountain! I was breathless so quickly and felt stupid as my friends skipped up the mountain. Many times I curled up on a boulder (Yes, we were crawling up boulders. What kind of hill has boulders I ask you???) and told the others to just leave me behind and catch me on their way back down. They wouldn't let me so I begrudgingly continued up the mountain. FOR AN HOUR. AT 80 DEGREES. UP ROCKS. Finally we reached the top and everyone asked me if I felt like it was worth it. Honestly? I probably won't do it ever again. But it was a really good lesson in sticking things out even if they aren't ideal and finding whatever positive you can in a less-than-perfect situation. I challenged myself and won. And once you climb up a mountain, you can't back down. For one thing, you should watch where you're going or you will most likely fall onto something very sharp. 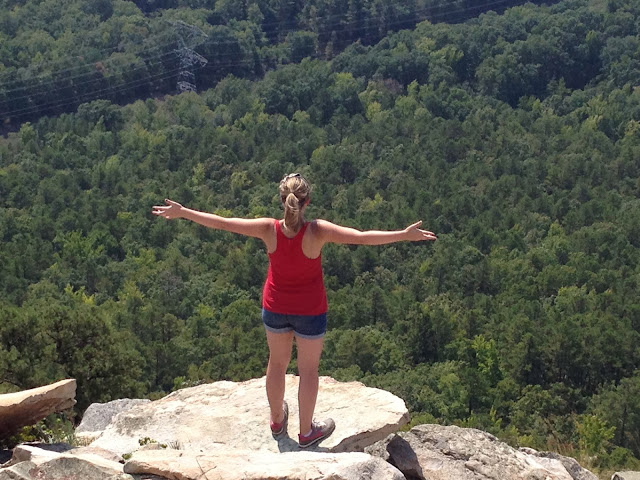 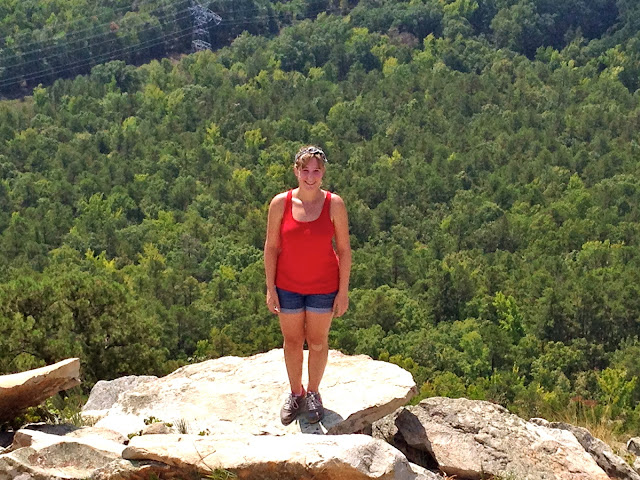 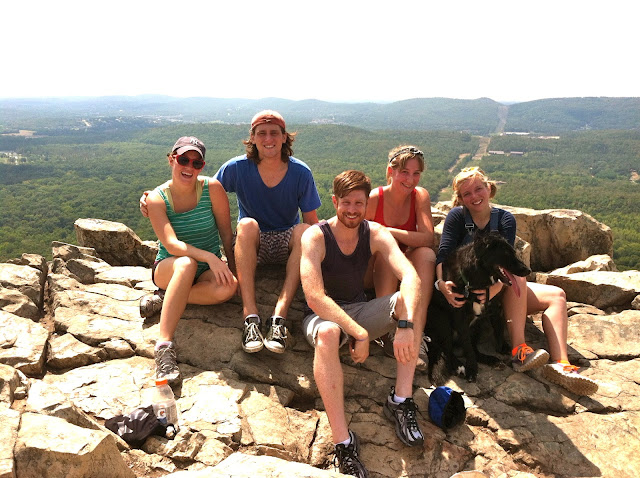 Next post I am hoping to talk about how bad I am at being poor. (And how I'm getting better at it.)
Posted by Sandi at 11:54 AM No comments: